Flanked by droves of meandering waterways and breathtaking gardens, the 2,500-year-old city of Suzhou is located along the southeastern edge of Jiangsu Province in eastern China. Suzhou is bordered by the Yangtze River in the north, Shanghai to its east, Zhejiang Province to its south and Lake Taihu in the west. 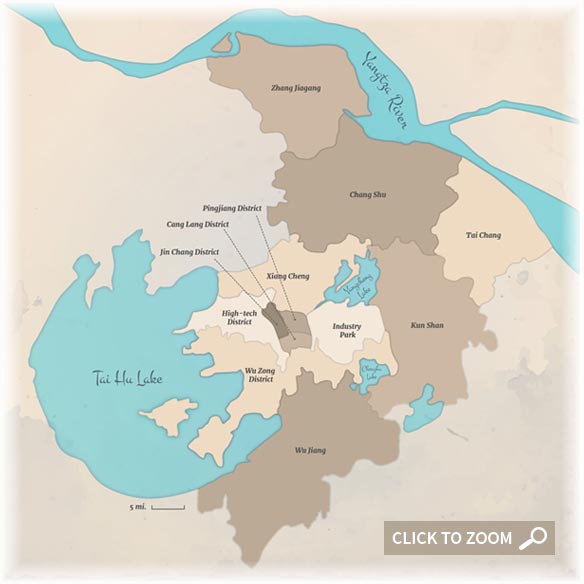 Distance from Suzhou to:

Known as the “Venice of the East,” Suzhou indisputably lives up to its canal-city name. Resting 13 feet (4 m) above sea level, almost half of the 3,276-square-mile (8,488-sq-km) city of Suzhou is covered by water — 42.5 percent to be exact — making it a top-ranking, water-rich Chinese destination.

Taihu Lake, nestled in southwestern Suzhou, covers a vast area of 902 square miles (2,336 sq km), making it China’s third largest body of fresh water. The Yangtze River, the largest river in China and one of the most spectacular rivers in the world, runs along Suzhou’s northernmost boundary and empties into the East China Sea. Another main waterway — the Beijing-Hangzhou Grand Canal — holds the title of longest canal in the world. This UNESCO World Heritage Site flows from north to south and remains a vital trade route and popular tourist attraction.

Suzhou’s immense expanses of water bless the area with ideal conditions for growing, fishing and farming. More than 712,058 acres (288,160 hectares) within Suzhou’s boundaries are used for cultivation. Fifty-five percent of Suzhou’s landscape is made up of gently sloping, low-lying plains, while a mere 2.7 percent of the land is graced by mountainous terrain.

Suzhou is divided into ten sections — six districts and four county-level (satellite) cities. The districts surround the old town and city center, while the cities line the outer edge of Suzhou. All sections are located within Suzhou’s jurisdiction and abound with culture, festivals and attractions.

The Wujiang District, positioned on the southeastern bank of Taihu Lake, is home to the thousand-year-old water town of Tongli, famous for hundreds of well-preserved gardens, temples and mansions.

The Wuzhong District is located along southern edge of Suzhou’s old town and the eastern shore of Taihu Lake. Adding to the district’s lure are the scenic zones of West Hill, East Hill and Guangfu, along with Qionglong Mountain and the charming water town of Luzhi.

The District of Xiangcheng lies just north of Suzhou’s two industrial zones. This district is home to the 1,200-year-old Huang Luo Temple and one of the largest collections of lotus flowers at the Lotus Pond in Moonlight Wetland Garden.

Moving towards the city center is the Gusu District. Formerly the Pingjiang, Canglang and Jinchang districts, this newly merged district is famed for its rich roster of culture. From the Silk Museum and Humble Administrator’s Garden to the Hanshan Temple and the Lingering Garden, this district is home to an incredible wealth of Suzhou’s delicate history dating back thousands of years.

It's all fun and games at Suzhou Industrial Park District. Identified as SIP, this district (or zone) is home to Suzhou Ferris Wheel Park, an amusement park with a bevy of thrill rides, among them Asia’s largest Ferris wheel, which overlooks scenic Jinji Lake.

Attracting major industries and tech-savvy crowds is the Suzhou Hi-Tech Industrial Development Zone, shortened to Suzhou New District. A vast contrast from the historical relics that surround it, SND is an up-and-coming ultramodern oasis. When development completes, the zone will feature soaring architecture, verdant gardens and tree-lined parks.

Changsu City, one of Suzhou’s four county-level cities, sits northeast of the Yangtze River. Among its natural wonders are the Shanghu Lake Scenic Zone — home to 63 species of birds — and the Shajiabang Reed Marsh Scenic Zone on Kuncheng Lake.

Neighboring Kunshan City is best known for Zhouzhuang, a landmark water town that dates back to the Yuan, Ming and Qing dynasties. Visitors enjoy exploring the area by way of boat, with its winding canals, elegant stone bridges and magnificent architecture, all enriched by more than 900 years of history.

Taicang City is Suzhou’s westernmost city, bordering the Yangtze River in the east and Shanghai in the south. At 2,400 years young, this countryside locale is often frequented for its fresh, local fare and elegant South Garden.